Zwin: transforming an ever changing landscape

SITE DISCRIPTION - The Zwin was founded as a nature reserve in 1952 by Count Léon Loppens. Today the Zwin is a try combination of a visitor park and a nature reserve. Sustainability is a top priority for the Zwin. This key features is also visible within the implementations of SCAPE. As one of the largest pilots in SCAPE, a pumping station as well as a reservoir (pumping buffer) will be installed. Furthermore,  the pilot focuses mainly on enhancing biodiversity, renovation of historical structures and reconversion of the slopes.

OVERVIEW OF THE WORKS:
An overview of the works and timeline can be found here: http://zwininverandering.eu/evolutie/

WATER RESERVOIR AS PUMPING BUFFER - A water reservoir will be constructed upstream from the station so the pumping station does not have to be continuously switched on and off. Such reservoirs are referred to as pumping buffers. To this end, a section of the area between the new station and Retranchement street will be excavated. The pumping buffer will have a bed surface of approx. 16 ha and be constructed with a slope gradient of 12/4, which will be sown and planted with reed fringes. This will be done by excavating approximately 70,000 m³ of soil.

Due to geographical constraints and expropriation options, only the left-hand bank (north-west side) will be widened. This means banks on the right-hand bank and connections to existing wet areas in the south will be spared, while the existing farm track will also be retained. The width of the watercourse bed will be 8 m across the whole length and the slope on the left-hand bank will be 12/4.

The new crossing under Retranchement street will be located south of the existing crossing so the downstream connection with the pumping buffer will be located entirely within the available area. This will allow the new crossing to be constructed while the old one remains in service. After diverting the stream, the remaining portion of the stream will be backfilled to ground level and compacted. The new crossing will consist of a pipeline which is 4 m wide, 2 m high and 12 m long.

HAZEGRAS FORTRESS - The current watercourse in the Hazegras fort is highly conditioned by two existing structures that enclose the area, namely the Burkeldijk overpass on the south-west side and the Hazegras lock on the north-east side (Zwin side). Bed width and bed level strongly determine the drainage capacity of the watercourse, whose flow direction will be reversed in the direction of the Zwin, even though the existing bed level slopes downwards towards the Leopold Canal.

Within Hazegras fort, the Isabellavaart will thus be deepened to a bed level of 0.8 m TAW. Bed width will remain 2 m so it is perfectly compatible with both existing structures, and the slopes will be reduced to 10/4 on both sides in order to obtain symmetry that best resembles the existing situation.

Within existing overpasses, the existing wooden floor structure will be partly removed without removing structural elements from or underneath the existing construction. The existing floor will be removed over a limited depth to allow the new floor to be constructed at 0.8 m TAW. 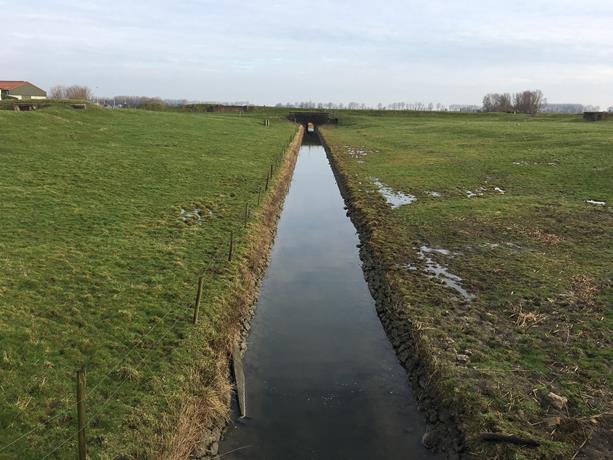